By JESSE McKINLEY and VIVIAN YEE 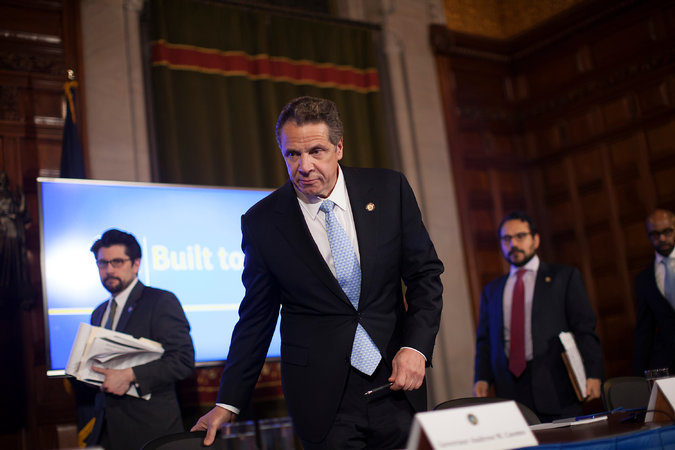 Gov. Andrew M. Cuomo in the State Capitol on Thursday to discuss the state budget at a press conference. Credit Nathaniel Brooks for The New York Times

ALBANY — Gov. Andrew M. Cuomo and state legislative leaders announced on Thursday that they had reached a budget agreement that would raise the minimum wage in New York City to $15 by the end of 2018, but initiate slower increases elsewhere, even in the city’s wealthy suburbs.

For Mr. Cuomo, the wage agreement came with clear concessions, as some lawmakers outside the city won a softer phase-in period. Long Island and Westchester County will not reach a $15 wage for nearly six years; areas north of Westchester are assured only of reaching $12.50 by 2021.

In announcing the $15 wage, New York became the second state to embrace that threshold; California lawmakers passed a similar measure only hours earlier on Thursday. The movement began in earnest in New York City in late 2012, when fast-food workers began the so-called Fight for $15, which became a nationwide effort to increase wages and support unions.

The wage issue was one of the final obstacles to reaching a timely accord on the next state budget, estimated to be more than $150 billion, which mixes high-profile policy measures with nuts-and-bolts infrastructure spending and aid to schools.

With the minimum wage deal and another hard-fought measure — one that would eventually provide employees across the state 12 weeks of paid time off to care for newborns or sick relatives and for families dealing with military deployments — the governor was able to claim victory on two signature issues.

Nonetheless, the wage agreement fell short of the sweeping statewide vision the governor had laid out in his State of the State address in January and championed in a subsequent labor-backed campaign named in honor of his father: the Mario Cuomo Campaign for Economic Justice.

Still, Mr. Cuomo, who had fought hard for the higher wage, cast the increase as a major accomplishment on Thursday, both for working people and for his own political brand.

The governor, a Democrat, also announced a plan for billions in income tax cuts beginning in 2018 — affecting families earning less than $300,000 — and to end the Gap Elimination Adjustment, which had drained money from local school districts for state uses. 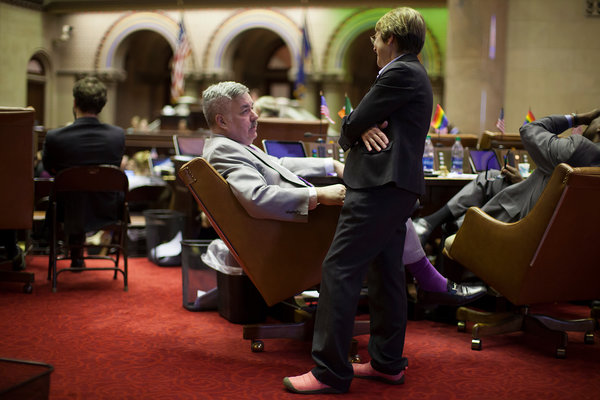 Daniel J. O’Donnell and Deborah J. Glick, both Manhattan Democrats, in the Assembly before the budget agreement was reached. Credit Nathaniel Brooks for The New York Times

Mr. Cuomo also backed off two plans adamantly opposed by fellow Democrats in the State Assembly: one asking New York City to shoulder $485 million in funding for the City University of New York, and another seeking hundreds of millions of dollars more in Medicaid savings, largely drawn from the city.

The budget was still being debated and voted on by legislators even as Thursday’s midnight deadline passed, officially making for a late budget. But work was expected to be completed Friday — the first day of the fiscal year — close enough to the fiscal target protect Mr. Cuomo’s reputation for efficient governing. (He has passed five previous budgets more or less on time.)

On-time budgets have become such a point of pride for the governor that lawmakers could not resist needling him once midnight came and went. “Just so you know,” State Senator Rubén Díaz rose on the Senate floor to say at 12:12 a.m., “the budget is late.”

The 11th-hour nature of the announcement prompted some concerns from lawmakers who were expected to review and vote on the bills with little time to read them. “Despite a lot of a good content in the budget, the process at arriving at the conclusion left a lot to be desired,” said State Senator Michael Gianaris, a Queens Democrat.

And if the budget accomplished two cherished liberal goals — higher wages and paid leave — it was still notable for what it left out. Mere months after the former legislative leaders of both the Assembly and Senate were convicted on corruption charges in what government watchdogs have taken to calling a “Watergate moment” for New York, there was no hint of ethics reform in the deal on Thursday.

On the wage issue, in areas north of Westchester, the minimum wage — now $9 — will rise by 70 cents a year over the next five years, eventually hitting $12.50 by the end of 2020, though the governor said it would continue to rise toward $15, depending on its economic impact. Indeed, in announcing the wage increase and brokering a deal with Senate Republicans, Mr. Cuomo seemed to be treading a fine line between confidence that $15 would eventually be reached statewide and cautioning that the wage could be suspended if it was determined to be hurting the economy.

The plan also included other caveats: Businesses with 10 or fewer employees will have nearly four years to institute the wage increase in New York City.

In describing a so-called safety valve, the governor explained how the wage’s move toward the $15 benchmark upstate would be determined by state labor and budget analysts — both parts of the executive branch — who would review the wage’s economic impact using studies conducted beginning in 2019. The state would then use that information to plan increases in the upstate wage — or to suspend the increase temporarily, statewide, depending on economic data.

“This is the smartest, safest way to go about it, in my opinion,” he said.

Senator Catharine Young, a Republican and chairwoman of the Finance Committee, described the idea of different rates for different regions as “very helpful,” adding that initially limiting the rate to $12.50 upstate would allow “a pause, for study,” after five years.

Sign up to receive an email from The New York Times as soon as important news breaks around the world.

Public-school spending accounted for nearly $25 billion of the budget agreement, which, after several failed attempts in past years, eliminates the deeply unpopular Gap Elimination Adjustment that the state first used in 2010 to cover a huge budget deficit at public schools’ expense. Both Republicans and Democrats supported restoring the funding. The budget also boosted funding for charter schools across the state by roughly $430 per student.

But CUNY and its statewide counterpart, the State University of New York, were unable to persuade lawmakers to allow them to raise tuition over the next few years.

As city leaders have grappled with a homelessness and affordable housing crisis, the governor has repeatedly promised bold interventions from the state. He delivered $20 billion toward that effort in the budget, though details of the plan remain scarce three months after he first announced it.

Both upstate and downstate areas received roughly $27 billion in transportation investments, restoring about $500 million for the second phase of the Second Avenue subway in the Metropolitan Transportation Authority’s 2015-19 capital plan.

Under the family leave plan, agreed to by Senator John J. Flanagan, the Long Island Republican who serves as the majority leader, and Carl E. Heastie, the speaker of the Democrat-dominated Assembly, state residents will be eligible for such leave starting in 2018 after working for six months at a job. The leave would eventually be extended to 12 weeks, and would be funded by deductions from employees’ pay.

Republicans like Ms. Young were excited about Mr. Cuomo’s tax cut, which will reduce state revenue by more than $4 billion annually by 2025. But Mr. Cuomo presented relief as long overdue for taxpayers in New York.

“Economically, I believe, it will be a net plus,” he said.

Mr. Cuomo said he felt no competitiveness with California, where legislators approved the wage increase on Thursday, sending it to Gov. Jerry Brown. New York’s governor was magnanimous, saying working people “need a raise” everywhere. But he did note that New York City residents would see that raise quicker than those in Los Angeles, where the wage will rise by 2022.

Asked whether he worried whether future governors might undo his wage proposal — Mr. Cuomo is up for re-election in 2018 — the governor smiled.